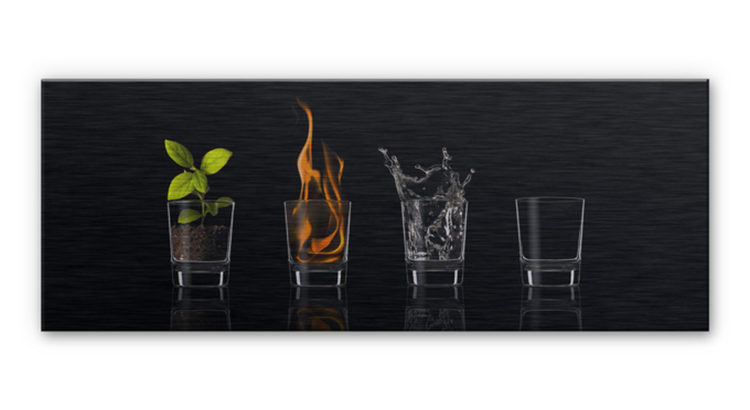 The next lens I want to look through on our game "All Fucked Up" is the lens of elemental tetrad from the book The Art of Game Design: A Book of Lenses written by Jesse Schell. Elemental tetrad is the diamond shape of the four elements aesthetics, story, technology, and mechanics. 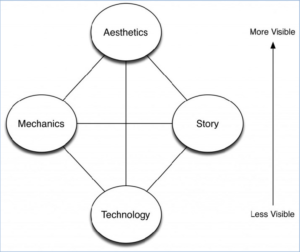 I will now answer the following four questions:

Our game focus on gamepads rather than keyboard or joystick. For testing and development purposes it is currently also possible to play it with the keyboard. But the main focus will be the gamepad. We will not go into a twin-stick game, so you can only shoot vertical.

The mechanics are laid out for gamepads to have good control over the character while jumping around. As well all the buttons to make reload, switch weapon from rifle to handgun smooth. The mechanics are rather simple, you can walk, jump, double jump, wall jump, shoot, reload, and switch weapons. The levels support this as you often close to enemies you have to switch to the handgun, as rifles don’t work on man to man combat. As well you will need the reload mechanics to have always enough ammo when you enter a platform.

The story is around a man who has been dropped into a weird world full of people who want to shoot him. To go back to his normal life he has to go through all the levels. The man has amazing gun skills he didn’t even know.

The aesthetics are rather simple. We focus more on the little things to add love to the game, like shell ejection. Every weapon does have its shell ejection and reload behavior.

We plan to add more little animations like dust, falling leaves, papers which whirl up if the characters rush through a room, flickering neon, and many more. We focus on these little things and keep the overall graphic design simple.

The very simple graphics might need improvement, I’m not sure if it is enough to just have these little animations. It’s not really up to date graphic design but unique. The animations of the guns reinforce the theme a lot as it is kind of a gun porn game. The cuteness of the characters helps to improve the overall aesthetics I think.
The levels drive the story and the goal is that the player wants to finish a level to see what is coming in the next level. We plan to have different worlds, starting with a grass and bunker world. But as well an office world, tower world, and more. The gamepad should make it more attractive to game shows, it’s much more likely that somebody picks up a gamepad and give it a try than sit down in front of a computer and uses the keyboard. Gamepads also need much less introduction as it is so much more natural to play.